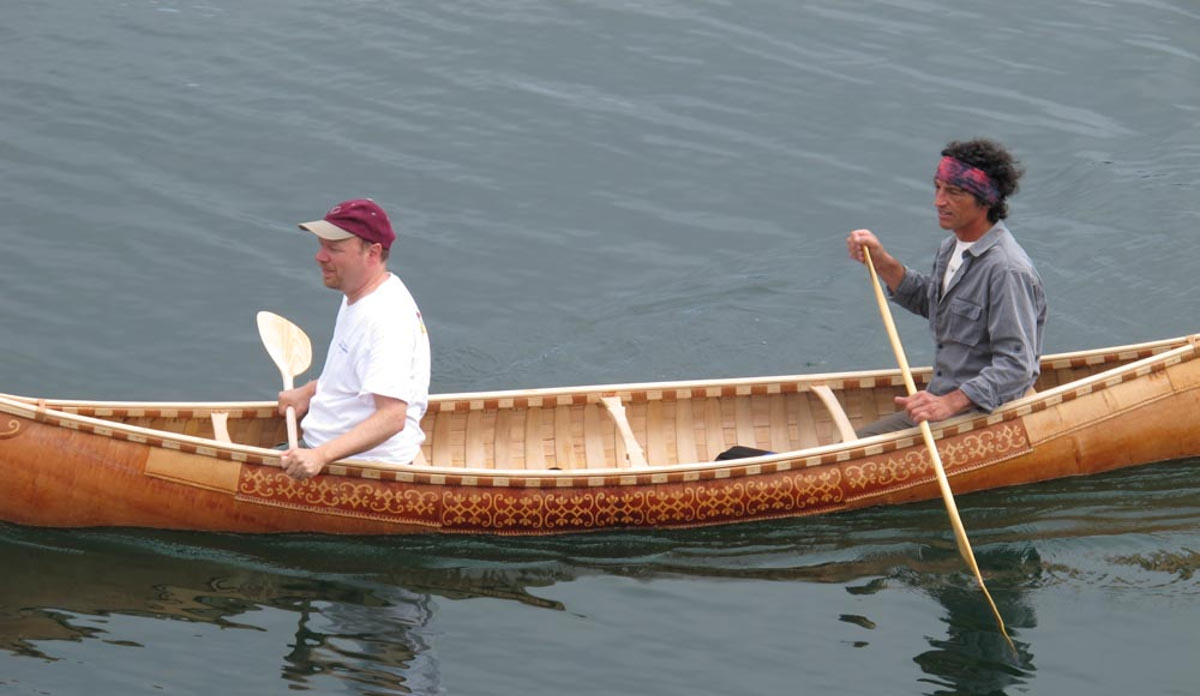 Over thousands of years of living and traveling on the ocean, rivers and lakes known today as Maine, the Wabanaki tribes Passamaquody, Penobscot, Maliseet and Micmac) developed highly refine perfectly adapted birchbark canoes for this area.

David throughout his youth; even during his years in San Francisco, California never forgot his dream to become a canoe maker. It was only in the 90s, upon his return to Maine, that he began to build birch bark canoes. As his grandfather was already old at the time and couldn’t teach him directly, David studied naval architecture in Eastport and majored in history at the University of Maine in Machias. His studies and work with Steve Cayard, a respected self-taught canoe builder, were fundamental in his process of becoming a canoe maker. After years of learning and working with Steve, David achieved mastery in the field. Later, David and Steve led countless projects together to build Wabanaki full sizes canoes in the United States and Canada, as well as to restore ethnographic canoes in different museum collections including the National Museum of the American Indian and the Peabody Museum at Harvard University. Their canoe workshops lasted a month and encouraged a participative approach since everybody could collaborate directly in the construction process. David always described his journey to become a canoe maker as a spiritual search, through which he learned to value even more the legacy of his grandparents and ancestors. According to him, every time he walked through the woods looking for birch bark, he felt that he was walking the same steps as his ancestors, who for thousands of years had understood how to survive in an extreme environment like Maine.

Unlike his baskets and panels in which David innovated in shapes and designs, when he built canoes he chose not to innovate and faithfully follow the constructive process designed by his ancestors.

The ancestors figured it out a long time ago. When I built canoes today, I change nothing. The hull forms are specifics to their intended uses, whether they are for use on the ocean, lakes or rivers. That is the way I continued to build them today…Experimentation is an essential part of growing as an artist, but it is good to know when it passes from stylish or modern to silly and dysfunctional. I like to remind people that the ancestors did just fine for twelve thousands years. We are still here because of their knowledge and skills.

David’s words in the book The visual Language of Wabanaki,
written by Jeanne Morningstar Kent, 2014, pp. 121

David also built scale canoe models studying and being inspired by museum collections. His canoe models are part of museum and private collections like the Children Museum in Boston and the Wyeth, Kalenyan and Schwanfelder privates collections from Maine, Santa Fe and San Francisco.

For David, one of the most important parts of his job was the gathering of his own material:

“60 percent of this work is gathering. I spend up to two months of the year just gathering. Two weeks in April and another two weeks in late June or early July is just for gathering bark. When I search for roots and cedar, I spend another several weeks in the forest camping out. I gather my canoe bark from staring trees, so I spend a lot of time and energy climbing. You must be attuned to our ancestral homelands in order to see what the forest is offering. During those times, I am always walking with the ancestors. It is necessary to honor them because it is they who bring us closer to our imagery”

David’s words in the book The visual Language of Wabanaki,
written by Jeanne Morningstar Kent, 2014, pp. 122